This tutorial shows some use cases of the HKLviewer.

Display I/SigI of a dataset

Reflections with I/SigI > 2 are considered to be good data for structure solution. Therefore, this cutoff is often used to determine the resolution limit. Here we examine a problematic dataset to show that for a given threshold of I/SigI a matching resolution cutoff does not necessarily exist.
Open the dataset merged.mtz in the HKLviewer. The IMEAN,SIGIMEAN reflections are shown by double clicking the row with that label in the upper left table. 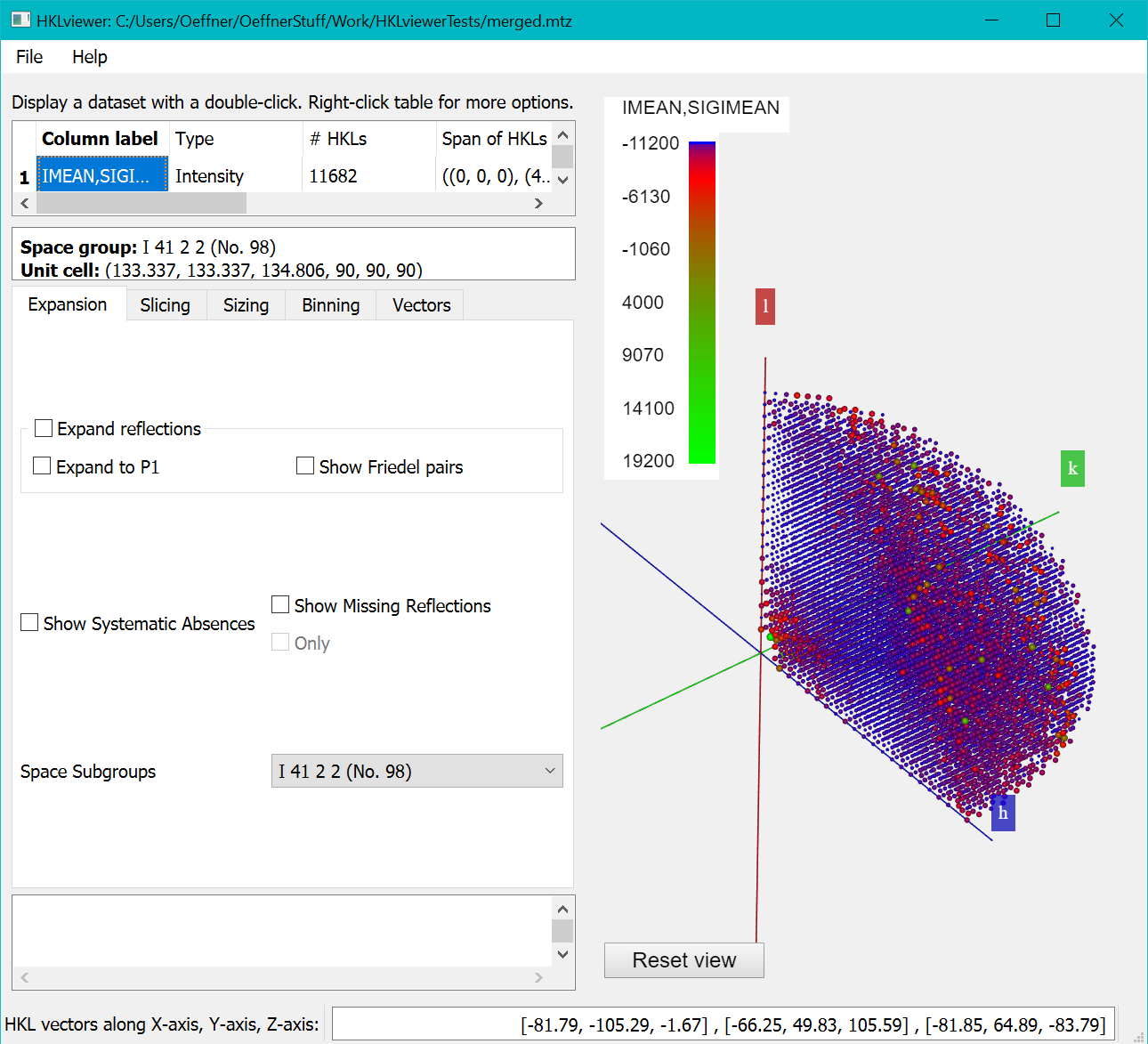 By default, the colour mapping for each reflection is according to values of the intensity. The next section explains how to color according to I/sigI values.

Right click the row with the "IMEAN,SIGIMEAN" label and from the context menu select “Make a new dataset from this dataset and another dataset”.
In the “Create New Reflection data” dialog enter the lines of python code as given below into the textbox and “IoverSigI” as the formula and the label for the new data respectively. 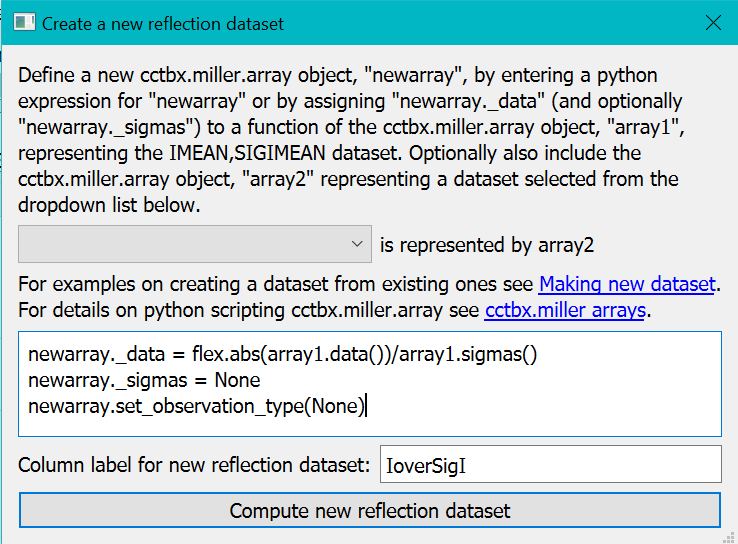 The first statement newarray._data = flex.abs(array1.data())/array1.sigmas() computes the I/SigI of all data values but with the absolute values of the intensities since there appear to be a significant number of negative intensities.
For convenience newarray is initialised to a copy of the original array (here representing "IMEAN,SIGIMEAN").
For I/SigI data we are not interested in the sigma values themselves. So we discard the sigmas array with the second statement newarray._sigmas = None.
The third statement newarray.set_observation_type(None) is optional. It tells CCTBX to deduce which type of data newarray will contain. In the case of I/SigI it will be plain real numbers. It could have been more specialised types such as map coefficients or X-ray observations. Since the colour mapping and sizing schemes are specific to each observation type, datasets classified with sensible observation types makes it easier to compare datasets in the viewer with other datasets of the same observation type.
Clicking the "Compute new reflection dataset" button will execute the script and display the IoverSigI dataset in the viewer as below 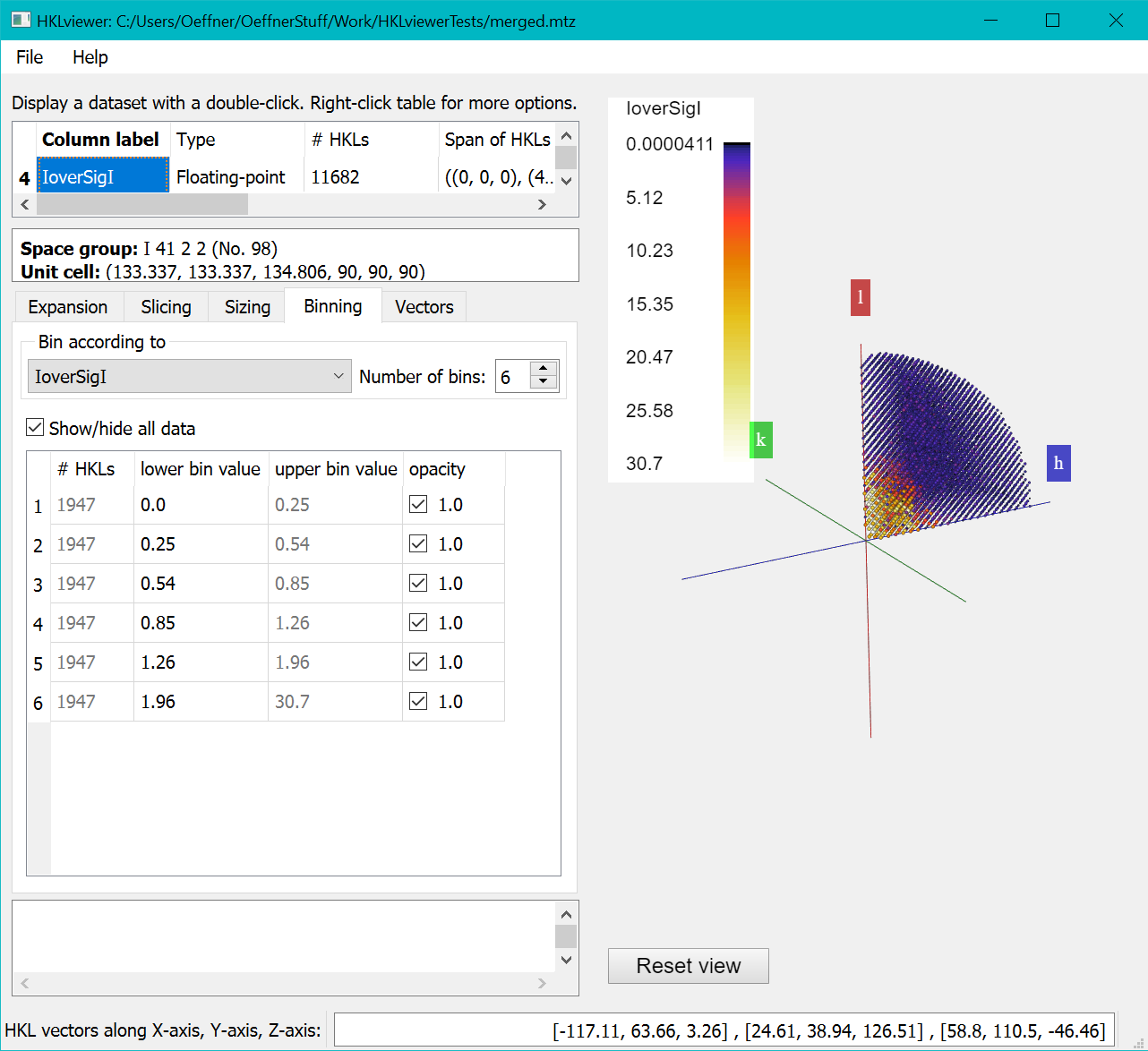 The "Binning" Tab lets you choose the number of bins and the thresholds. By default data is binned according to resolution. But here we have binned against the newly created “IoverSigI” column and set the number of bins to 6.
HKLviewer will try to put an equal number of reflections into each bin and then compute corresponding bin thresholds. For this exercise, we want the bin thresholds at defined I/SigI values: 4.0, 3.0, 2.0 and 1.0.
Do this by entering these new bin thresholds by typing the numbers 4,3,2,1 in row 6, 5, 4 and 3 in the “lower bin value” column.
Then untick the "Opacity" checkboxes of the first three bins to hide reflections with I/SigI less than 2. 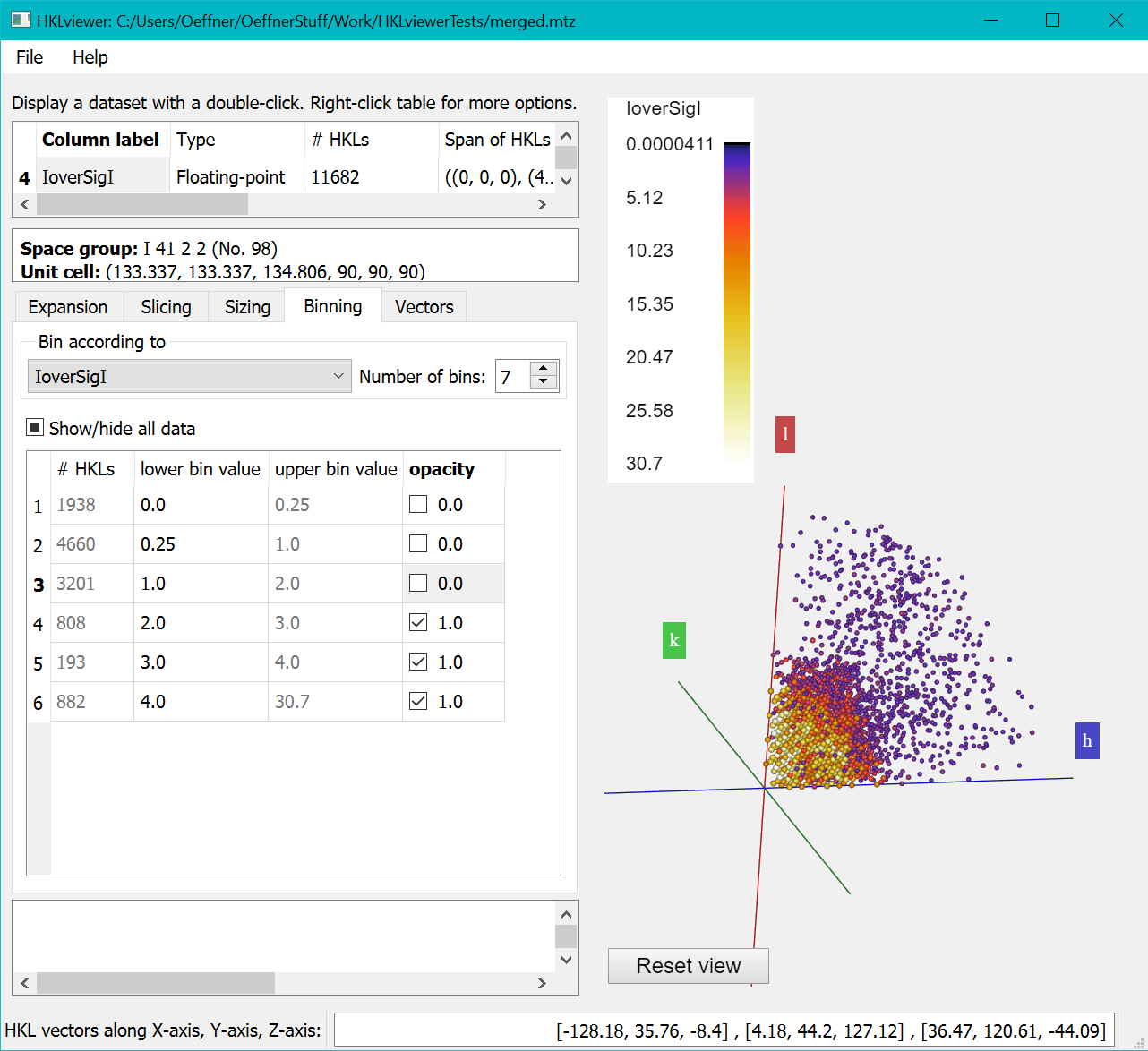 The first column of the "Binning" shows the number of reflections in each bin. The relatively small total number of reflections with I/SigI > 2 suggests that it could be difficult to solve the structure for this data set. This is also visible in the Viewer on the right, which shows much fewer spheres than the figure above where none of the bins have been excluded.

Inspecting TNCS modulation in a dataset

tNCS or pseudo-symmetry is a crystal pathology where two or more molecules in the unit cell are aligned in a way to cause interference in the diffraction pattern. It shows as periodic modulation of the diffraction pattern and can cause problems for structure solution unless identified and taken into account by the software. tNCS vectors are real space vectors and can be determined before structure solution attempts. The dataset 6C5F (available from the PDB) has tNCS which is detected by programs such as phenix.xtriage. It determined the pseudo-symmetry vector to be [0.333, -0.334, 0.040] in fractional coordinates. Follow the steps below:

This will show the modulations in the data as ripples in the reflections in planes perpendicular to the tNCS vector. It can be useful to tick the “Show Real Space Unit cell” checkbox to see where the tNCS vector points within the unit cell. 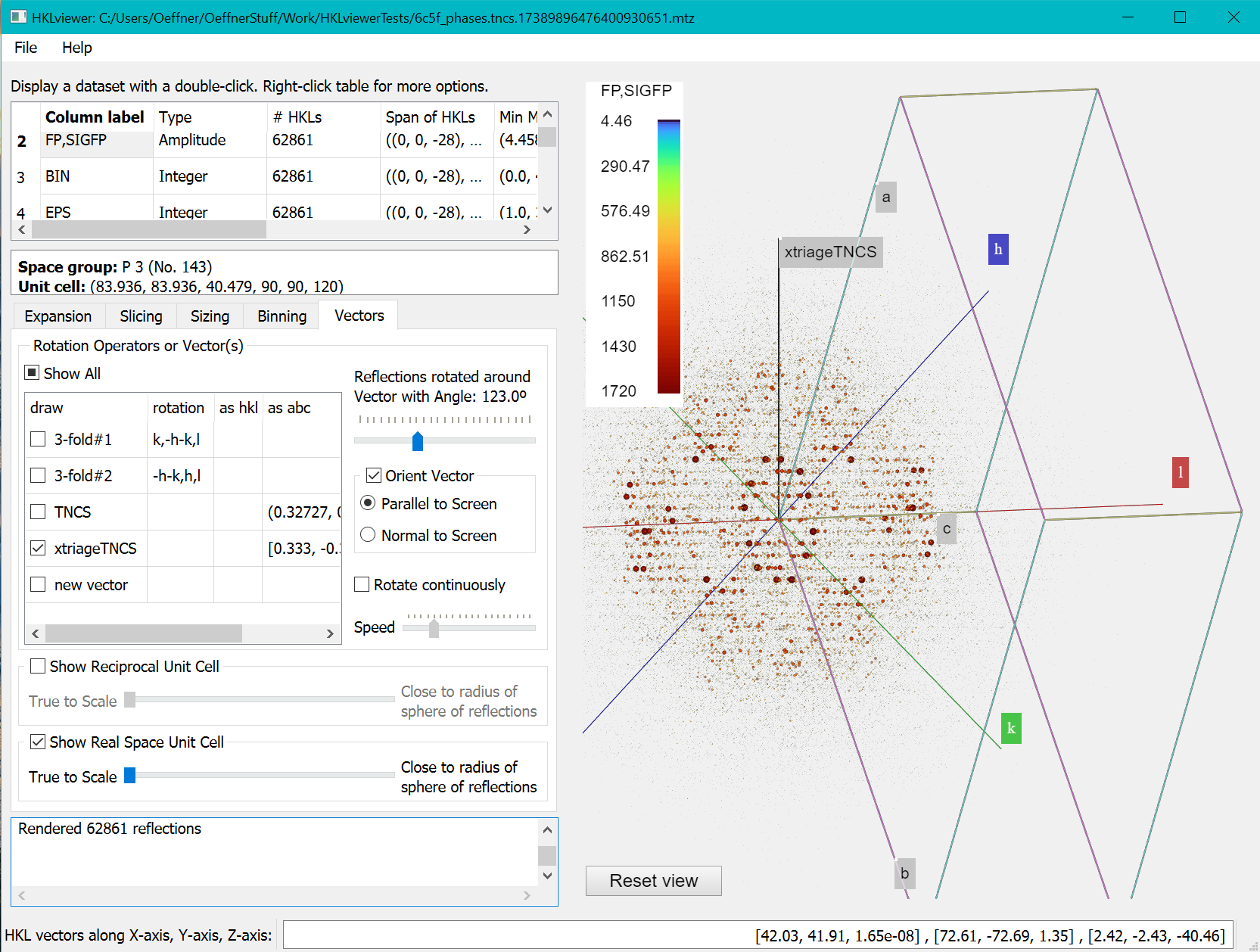 Phasertng, which is currently under development, stores a data column, TEPS, with the correction factors, epsilon, revealing the tNCS modulation of the intensities. The coordinates for the tNCS vector is embedded in the mtz file when the mtz file has been processed with phasertng. This is illustrated below where the reflections have been sliced with a clip plane width of 8. On the sizing tab we have set the power factor to 0 and the linear scaling factor to 0.8. The modulation is clear from the alternating layers of red, green and blue layers of reflections. 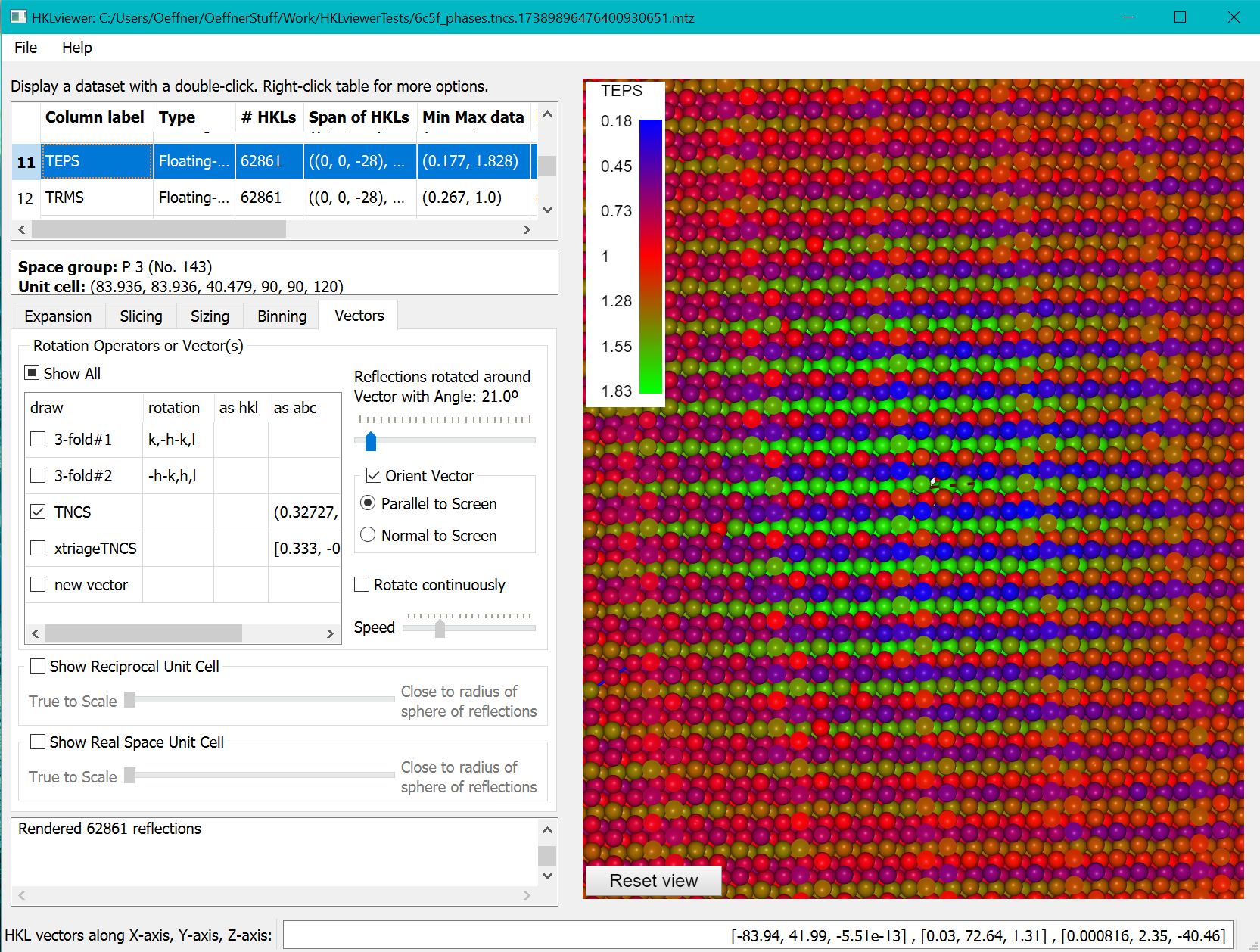 The phenix tutorial with the file, porin.mtz, illustrates twinning. The twin operator found by phenix.xtriage is -h-k,k,-l.
Follow the steps below: 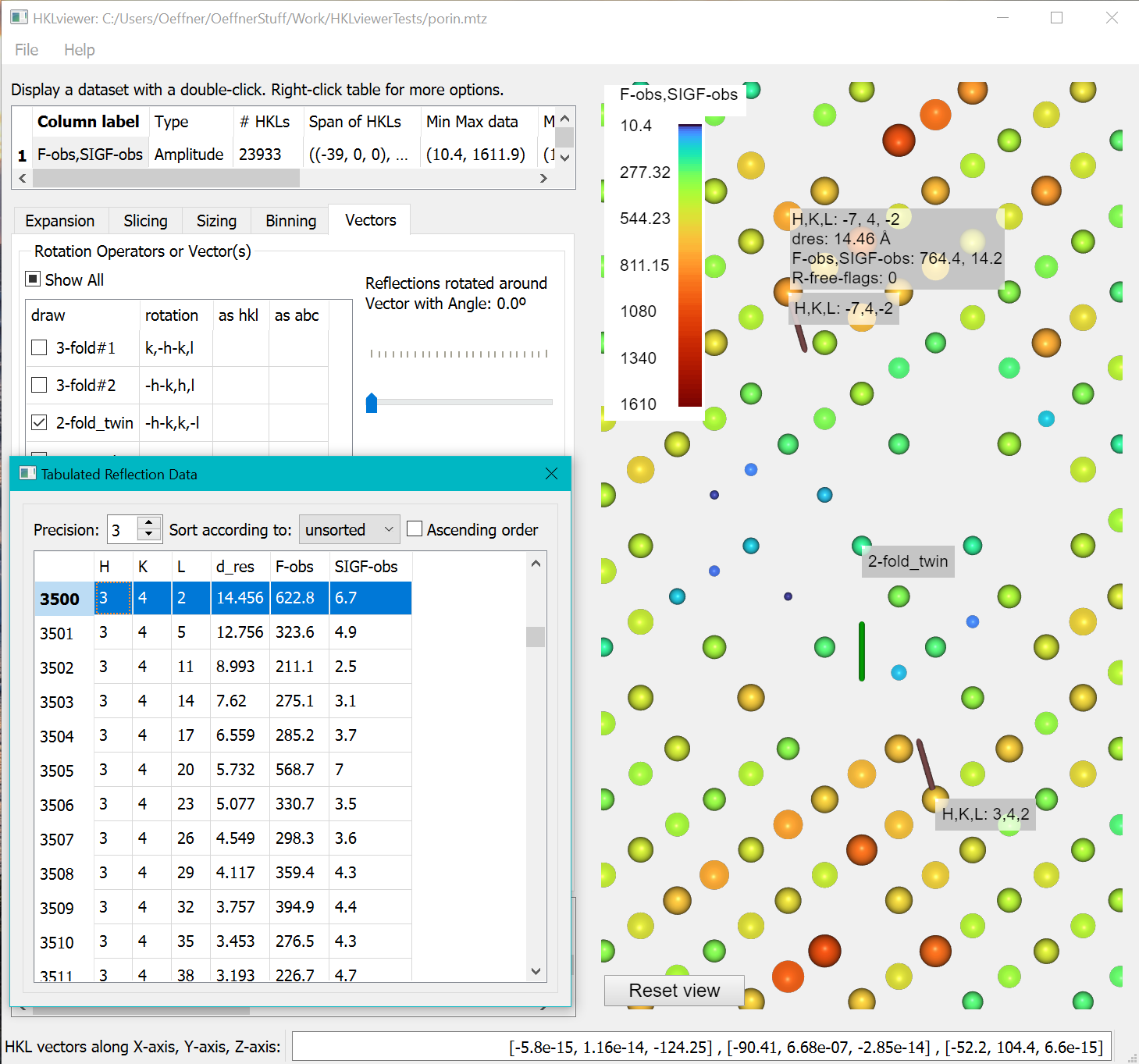 To inspect data values of reflections related by the twin operator right-click a reflection in the view. It will bring up two tooltips with the hkl indices at the end of two vectors from the reciprocal space origin pointing to the twin reflections. Due to the clip plane, the vectors may not be fully visible. Double click one of the reflections to bring up the standard tooltip with all other values represented by this reflection (dres, F-obs, SIGF-obs, R-free-flags). Right-clicking a reflection will highlight the data value in the “Tabulated Reflection data” window. The HKL indices in the table are the original from file. Since the twin operator is not part of the spacegroup the hkl index in the tooltip of a twin related reflection may differ from the HKL index generated by P1 or Friedel mates expansion highlighted in the Tabulated Reflection Data.